skip to main | skip to sidebar

(Updated 4/2/13)
Recently, the occasional article, photo, or video about my running/racing progress has been published, and here's where I'll archive these:

(Click on images below to see them in higher resolution)

April 2013
I will be one of several stories in a full length documentary about various CF patients accomplishing incredible feats despite the disease. You can watch the trailer and read the various stories at:

I even made the movie poster... 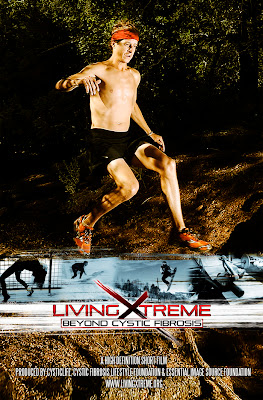 February 2012
Trailrunner did a follow-up interview with me after my sub-15 hour finish at the Rocky Raccoon 100 miler. Here are links to the published and the full versions of the interview:

November 2011
The following article was published in the December 2011 issueTrail Runner magazine: 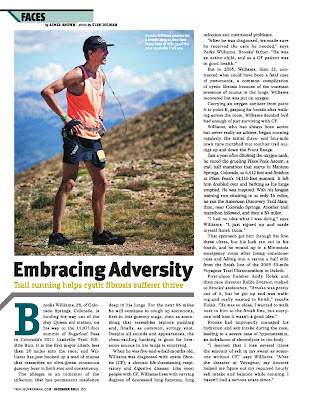 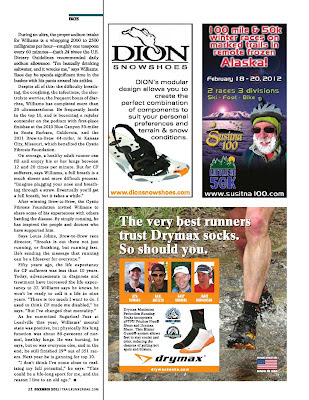 July 2011
The race report for the Brew to Brew 44 miler in April was published in Ultra Running magazine and featured yours truly. 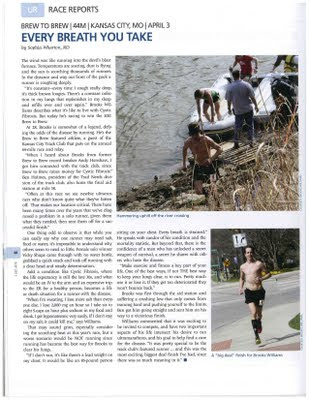 January 2011
I was featured in the 'What it Takes' section of the February 2011 edition of Runners World. While not front-page worthy, it's a start! 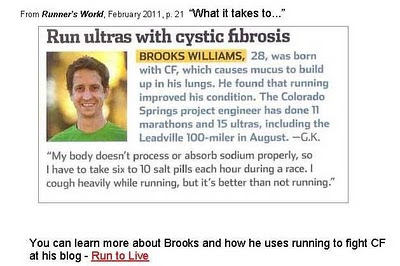 July 2010
Prior to my attempt at the Hardrock Hundred an article was published about me in the Colorado Springs Gazette and online. Here's the link: 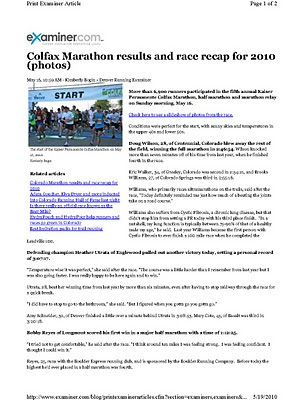 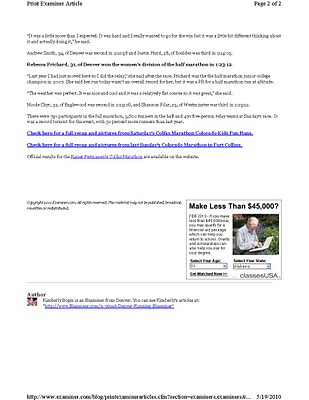 April 2010
I was interviewed about my running with CF for an upcoming documentary entitled 'Why Run?'. Following this, there have been numerous follow up interviews and race videos taken documenting my racing exploits. This film is due to be released in late 2010. Click here for the 'Why Run?' website.


February 2010
The University of Sussex in England wanted to include a bio about my running in an upcoming psychology textbook which is slated for a late 2010 release. Here's a rough draft: 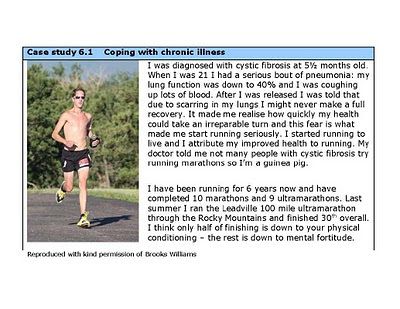 July 2009
Here is the full Duluth tribune article from the 2009 Minnesota Voyageur 50 Mile Trail Race (minus the pics): 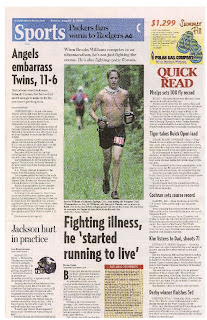 Bruises and abrasions covered the body of Brooks Williams . He had a black eye and a broken toe. He hurt all over.
He remembers little of being injured in the Minnesota Voyageur Trail Ultramarathon 50-Miler on July 25 in Carlton. He passed out a half-mile from the finish line and was hospitalized overnight for dehydration and hyponatremia, or low sodium.
Williams , 26, from Colorado Springs, Colo., said it was a scary situation, yet was the first time his body had let him down even though he’s an anomaly — an ultra runner with cystic fibrosis.
“My doctor has told me that few people with cystic fibrosis try ultramarathons. I’m a guinea pig,” Williams said from home last week. “I was taking care of myself during the race. I was taking 500 milligrams of sodium an hour, 20 ounces of fluids per hour, an electrolyte tablet every half-hour and energy gel. But I still got incoherent and must’ve fell a few times.”

Williams said he was diagnosed with cystic fibrosis at 5½ months of age and wasn’t expected to live past 18. The genetic disease affects the lungs and digestive system as a defective gene and its protein product cause the body to produce unusually thick, sticky mucus. The mucus clogs the lungs and leads to life-threatening lung infections.

In 2008, the median predicted age of survival rose to 37.4 years, up from 32 in 2000, according to the Cystic Fibrosis Foundation. Williams , a project engineer for a mechanical contractor, said he survived a serious bout with pneumonia at age 21 and then looked to improve his health. He has been running the past 4½ years.

“I became aware of how quickly my health could take an irreparable turn, and this fear is what made me start running seriously,” he said. “I started running to live and I attribute my improved health to running.”

Keeping strong and fortified over long distances has proven tricky for Williams .

Nonetheless, he has completed eight marathons and four events longer than 26.2 miles. He finished the Bighorn Mountain 50-Mile Trail Run on June 20 in Dayton, Wyo., but needed intravenous fluids afterward. At Voyageur, he was monitoring his body and last remembers checking his watch for an elapsed time as it read 8 hours, 25 minutes. He figured he’d finish in about 8:35, which would’ve placed him 10th in a field of 160. The race trail is along a rugged course through Jay Cooke State Park and Fond du Lac State Forest from Carlton to the Lake Superior Zoo and back.

A finisher told race officials he saw Williams prone on the course. Rescuers came to his aid and took him to Community Memorial Hospital in Cloquet. He was given fluids through the night and released the next morning, yet his journey wasn’t over. He drove 20 hours alone back to Colorado Springs, with an overnight stop in Grand Island, Neb.

The trip to Northeastern Minnesota was his first. He was drawn here, he said, because the race fit his schedule in preparation for the Leadville (Colo.) Trail 100-Miler through the Colorado Rockies on Aug. 22, and because of family lore. The story he has been told is that his parents met and were married in Duluth, although they now also live in Colorado Springs.

"I’m coming back to run that race again for personal reasons. I’m not going to let a course beat me,” said Williams .

-About 1000 cases are diagnosed each year